I recently had to dig into biometrics on iOS and thought I would write some things down, mainly for the benefit of Future Me.

Apple’s documentation has a good walkthrough of how to use biometrics to authenticate a user in your app. The process boils down to:

You can set touchIDAuthenticationAllowableReuseDuration to avoid prompting the user for authentication again if she recently unlocked her device. The default is 0, so the user will be prompted each time.

After a successful call to canEvaluatePolicy(_:error:) with a biometric policy (or a successful biometric authentication is performed after calling evaluatePolicy), evaluatedPolicyDomainState is populated. This property is an opaque data blob that is changed whenever the authorization database has been updated (e.g. a new finger is enrolled in Touch ID or a finger was removed from the database).

There are a few strings you can set when interacting with the Local Authentication framework. Here is a quick overview of where they are set and where they are used. 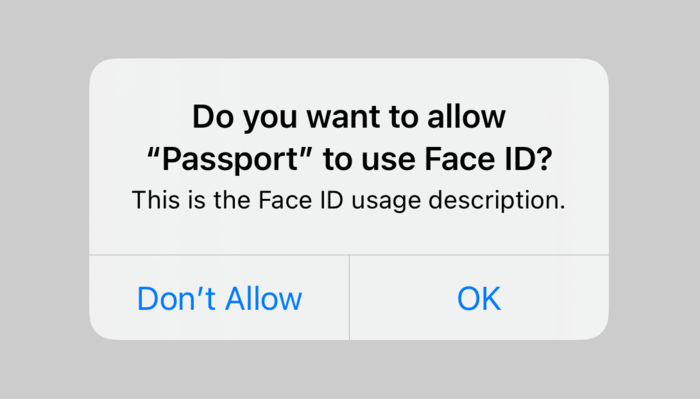 When calling evaluatePolicy, one of the arguments you pass is the localizedReason. This explains why your app is requesting authentication. Apple’s recommendation is to:

[…] provide a clear reason for the authentication request, and describe the resulting action. Make the message short and clear, and provide it in the user’s language. Don’t include the app name, which already appears in the authentication dialog […].

On devices with Touch ID, the localized reason will be shown in the alert: 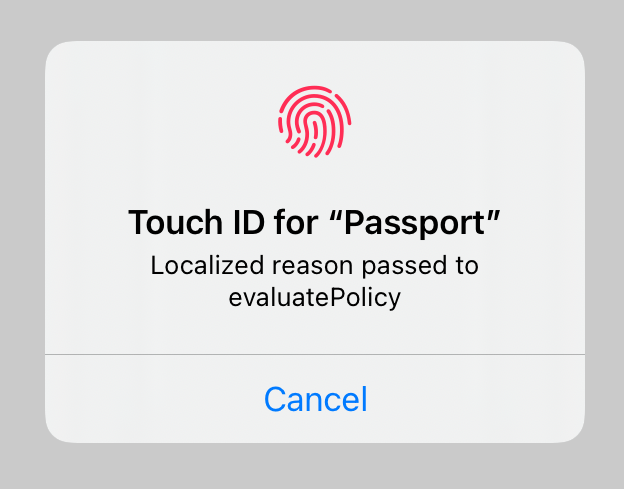 On devices with Face ID, the localized reason won’t be shown until after a second failed authentication attempt. 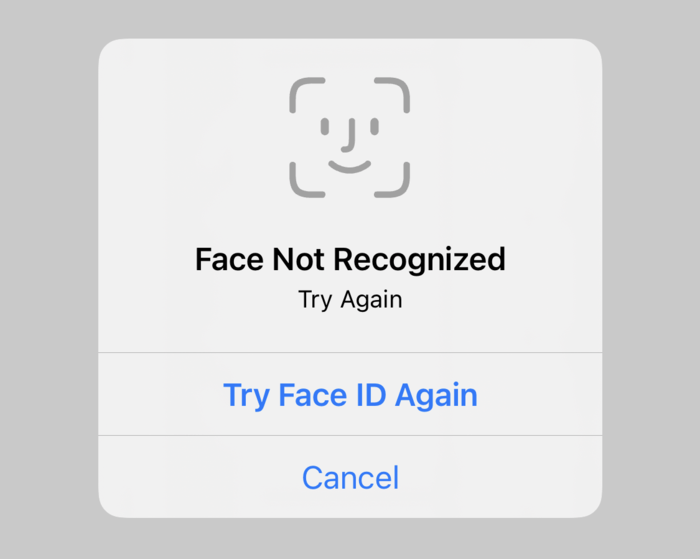 The localizedReason can also be set on the LAContext, but:

Consequently, it doesn’t make sense to set LAContext.localizedReason — it will never be used.

After a failed biometric authorization attempt, the system will show a fallback button in the authorization UI. You can set the title of this button via LAContext.localizedFallbackTitle. 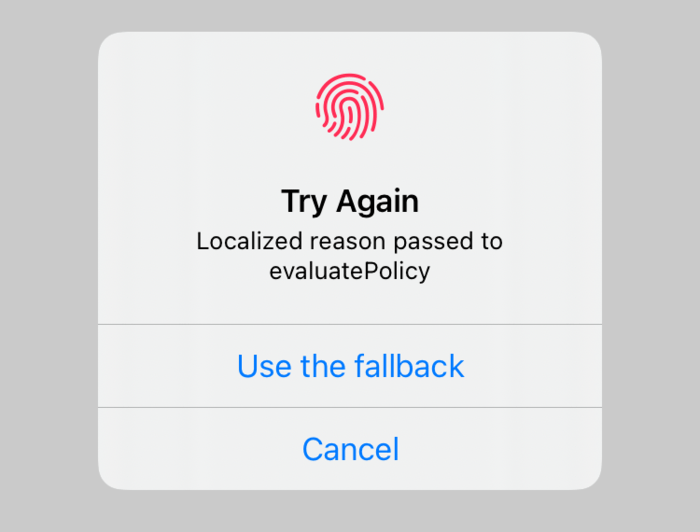 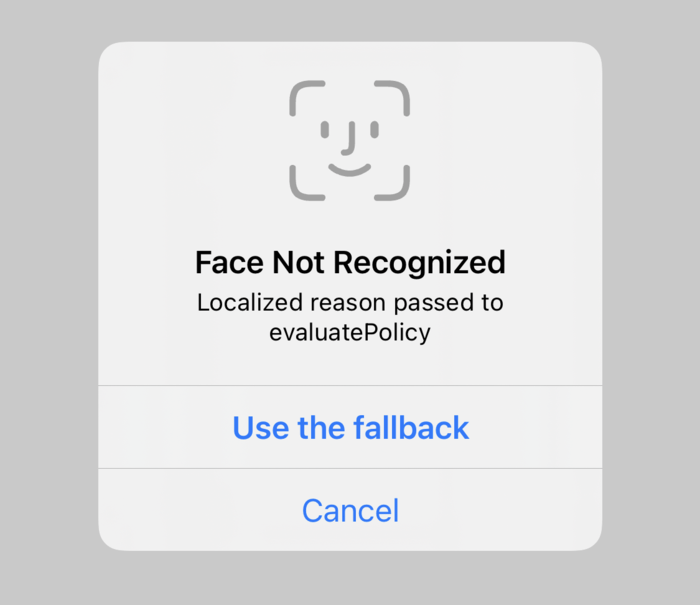 If this button is tapped, false will be passed back in the success parameter of the completion handler, and you will get userFallback as the error code. You can use that to navigate to another authentication mechanism (e.g. prompting for a PIN managed by your app).

To remove this fallback option, provide an empty string: 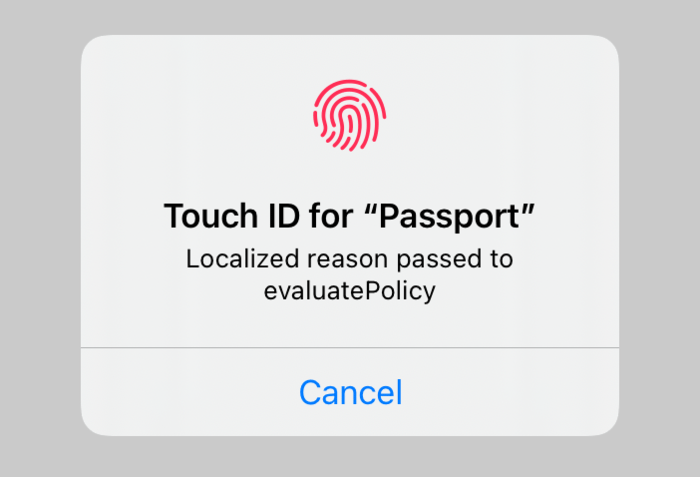 You can also customize the title of the cancel button. This is done by setting localizedCancelTitle. 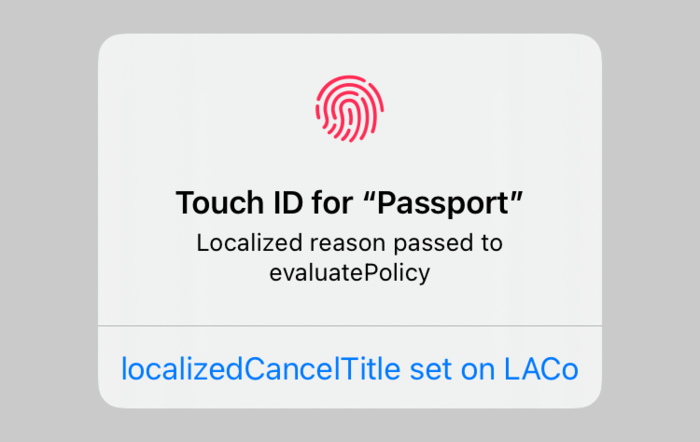 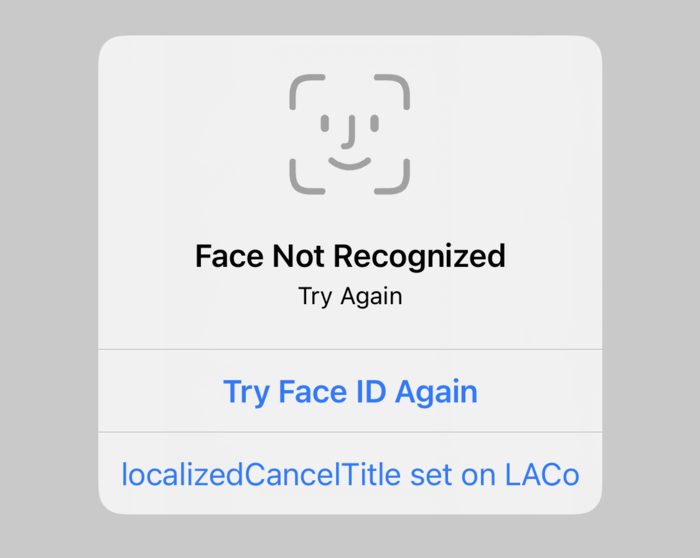 There is no way to query the system about whether your app has already requested access to Face ID. If this is something your app needs, you will need to track it yourself.

In the “Authenticator” sample code (you can download it from the “Logging a User into Your App with Face ID or Touch ID” page linked at the top) there is a seemingly innocuous comment in ViewController.swift:

The implication here is that if you reuse an instance of LAContext on which you previously called evaluatePolicy and got a success, biometrics will not be checked on the subsequent attempts; it will automatically succeed. This isn’t mentioned in the docs (I’ve filed feedback with Apple about this — FB9984036).

What this means for you, as a developer, is that your LAContext objects should probably only live for the duration of a single authentication request (assuming you want to reauthenticate each time). If you’re creating some infrastructure for managing biometrics, for example, and are holding onto an LAContext instance, it needs to be mutable so you can replace it on subsequent attempts (i.e. var context: LAContext instead of let context: LAContext).

At work we’re having to wait an inordinate amount of time for Xcode to finish indexing our rather large Swift project. I’ve consequently spent a lot of time over the past few weeks digging into the internals of indexing. This is more or... Continue →